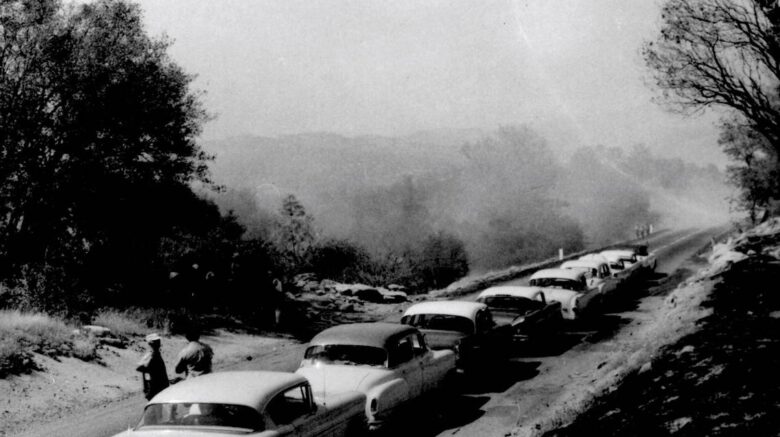 July 10, 1961, in a foothill area of Mariposa County called Usona, a young man started a fire. By 4 PM the next day, this small fire had turned into the fastest growing fire in California. In just 5 days this Harlow fire would consume over 43,000 acres of Mariposa and Madera Counties, destroying 104 structures and claim 2 lives. In just two hours it burned over 20,000 acres making it one of the fastest spreading fires in the history of the United States.

I was five years old and living in the town of Oakhurst. A small but growing community that populated the spine of State Highway 41 as it made its way from Fresno up to Yosemite National Park. Oakhurst was a foothill community that relied heavily on the local mill and logging industry as a form of commerce and employment.

Our home was located in Oakhurst at the base of Deadwood Mountain. A large imposing landscape of fir and oak trees rose quickly from Oakhurst up to its peak at 4,547 feet. Although the Harlow Fire had started to the north of Oakhurst in Mariposa County, just beyond Ahwahnee and Nipinnawassee, it had spread quickly Southeast consuming those communities and heading directly towards Oakhurst.

The entire basin that contained the town of Oakhurst was cloaked in a heavy cloud of thick smoke and fire fighting apparatus was everywhere. My elementary school was a massive fire camp. As a five-year-old my world was ablaze and the adults were concerned which was a very scary time for a five-year-old. Then the evacuation order came. We had 10 minutes to pack up everything that we could, load it into the family pick-up truck, and be ready to leave.

As my family sat in the back of our truck among a pile of positions gathered in a frenzy, I remember starring at Deadwood Mountain watching massive fir and cedar trees explode into flames like matchsticks. At one point the Harlow Fire climbed from the base of Deadwood Mountain to the peak in just 17 seconds….Ash and embers floated down from the sky as we waited for the order to leave….

The fire had reached the edge of Oakhurst. If it hit the gas station at the south end of town it would rapidly race up Highway 41 and the entire town of Oakhurst would be lost. Due to the heroic effort of those battling the flames, they established a line of defense and although the fire burned a 270-degree area around Oakhurst, the town was saved…..

So, what does a fire that was started in 1961 have to do with the current condition of wildfires in California sixty years later? As the saying goes if you don’t learn from the past you are distended to repeat it in the future. Unfortunately, the loss and devastation that was experienced in the Harlow Fire continues to occur annually in California and the Western US. Today’s wildfires are much larger and more destructive than the Harlow Fire was at 43,000 acres.

The image of watching the beautiful trees on Deadwood Mountain explode left a lasting impression on that young boy 60 years later. We are losing too much of our forests to wildfire. Last year the founder of Citizens For Sensible Forest Management, Bob Longatti reached out to me during the Creek Fire, which for less than a year was the second-largest fire in California. Bob had had enough. We had both grown tired of seeing our surrounding mountains, landscape, and habitat go up in smoke and reduced to embers and ash.

Change must occur, if you do not learn from the past, you will experience the same results in the future. The past approach to forest management and fire suppression has placed the forests of the Western United States at risk. The results are evident and fill the headlines daily while they fill our communities with smoke.

Citizens For Sensible Forest Management is a grassroots effort and a call for action. We have seen enough and change must occur and must occur quickly. We do not have another 60 years to fix this problem. The future of our forests and the forests and a lot of five-years-old’s are depending upon us.

Ralph Goldbeck is co-founder of Citizens For Sensible Forest Management.